So the feeling a parent(s) gets when they find out their child will have to have surgery/procedure done….Your heart gets weak because you think of all of the what ifs, and just the thought of your child having surgery period. You wish you could take their place.

Rey had to have yet another surgery done on her lip, in which was operated on a little over 2 years ago. It wasn’t until right after her 4th birthday she started complaining about her lip (the same spot she had her hemangioma removed). There was some sort of mass that had swole up and made her lip appear puffy.

After having her checked, it was revealed by the doctor that it was some sort of cyst that inflamed out of no where (it was benign). It would have to be removed otherwise, it would continue to cause discomfort and would never diminish.

Thankfully the surgery was outpatient, which meant she could come home not long after the surgery. I think the toughest part was she could not eat or drink anything the next morning. She could drink pedialite, water or apple juice before 7am, but babygirl is still sleep and we aren’t waking her! Her surgery wasn’t until 11:30a!!! I had to talk to her about it when she said she was thirsty or hungry and let her know mommy would drink or eat anything either until she could. Once she was done with surgery, she could eat and drink all she liked. That made her feel better. 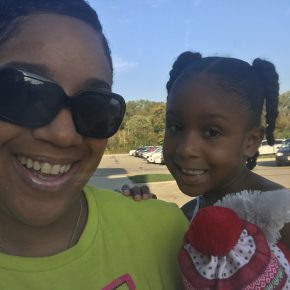 The doc reassured they got it all this time around and would look forward to Rey’s 3 week checkup. After about 2-3 hours of being out of surgery, she was trying to play on the playground like it never happened.

Before the surgery, trying to get her mask (that they would use to put her to sleep) on her face was like pulling teeth. I had to figure out a way to make her comfortable to put on and told her that the mask was her superwoman costume. Out of no where she put it on and made a muscle pose. Lol- My little girl, so strong. 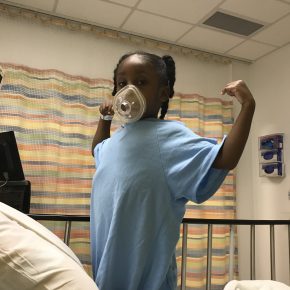 I left it all in God’s hands.

Rey is back at it like normal playing with her lil brother and friends. That’s what brings us joy!