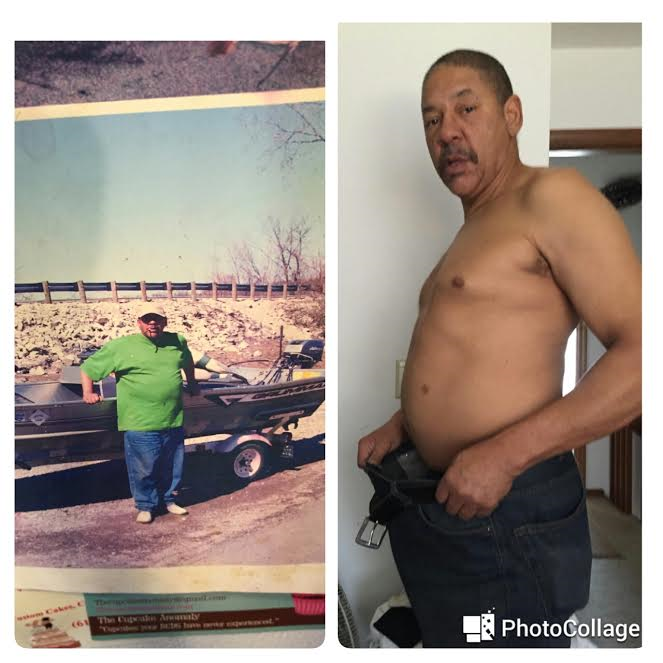 This is who I call Mr. Dude. He is who I would also call my Godfather. He adopted me in as one of  his daughter of two boys (who my sister and I grew up with). We grew a close bond  As I advanced in track & field.  Mr. Dude, in his time, was a superstar track athlete himself who excelled in hurdles and sprints. He took me under his wing as his athlete when I would come home from college to continue training. He NEVER backed down and gave up on me. He is one of those ol’ school men who know the tricks of the trade and provide a lot of wisdom. As much as I fussed with him in training, I appreciated his support and encouragement. He is one of the reasons I excelled in Track & Field. I thank him for that.

Now….. I get to be what he has been to me. His journey started a while ago, but like anyone else who begins a health & wellness journey, have some setbacks. Mr. Dude is a prostate cancer survivor, who not only dealt with that, but other surgeries  that kept him down for a while, yet he still got right back up! Through it all he kept me in the loop with what he was doing to get back in shape. I would offer suggestions and even send exercise clips to help aid in his routines. He has had to change his eating habits dramatically in conjunction with his surgeries he has had, and he has stayed very disciplined with it, even during THANKSGIVING when everyone was eating so good, he stayed firm.

So the other day, Mr. Dude sent me these photos of his before and his current results.

The photo on the left is 3 months before my sister’s wedding, which was Aug. 29th 2015. He was 253. Now he is weighing in at 195! He said “I have no clothes that fit anymore and I still do 5 miles everyday.” Walking has been Mr. Dude’s “Go-to” because that’s what he loves to do and what is working for him. He just recently started adding resistance exercises into his routine. I am so very proud of him.

This is a testament that if you know what you want, and you stick to it, your goals WILL happen.