4Star Fitness, LLC
Make It Right, Get It Tight! 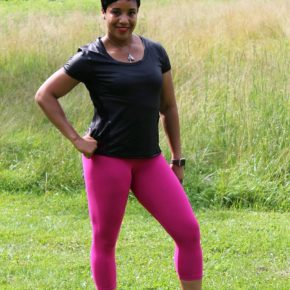 My name is Crystal Winfrey-Ellington. I am a wife, mother, daughter, sister, friend and former athlete.

I hold certifications/experience in advanced personal training, group fitness as well as personal & advanced nutrition through Shaw Academy where I act as a nutritional advisor.

Ultimately, all my hard work earned a Full ride Academic and  Track & Field scholarship to Ball State University. I must say although Track & Field helped pave my way through college in the sports realm, I thank my Racquetball career in what it taught me physically and mentally growing as an athlete and person. All of the people I met across the country, the places I trained/competed, the high level of competition and my coaches, I can say played a major part in helping me through my college career and even into today.

I believe I was 14 yrs old in this pic and the youngest (bottom row far left). First time @ the Olympic training center in Colorado Springs to train for Racquetball. Saw Blaine Wilson from the Mens US Gymnastic team! 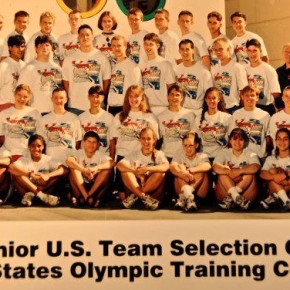 In college, I chose to get an education in something related to the human body, being that I stayed so active and wanted to have the benefit of knowing how the human body worked.

I performed well my first 2 years in Track earning Women’s Track Athlete of the Week, was a NCAA Regional qualifier in the 400m dash, named to All-MAC First Team in the 400m and Second Team in the 200m dash, and anchored the MAC Championship winning 4x400m relay. However, I learned quickly just how the body worked personally after I got injured, which ended my competitive streak. Thinking I could eat anything I wanted and my athletic body would metabolize the food, while I was down recovering, was not the case because I gained almost 30 pounds. 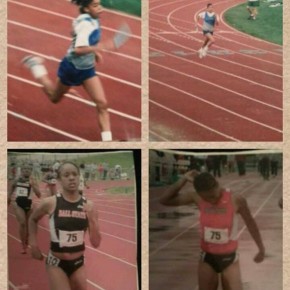 Middle school track….took it all the way to college. College pics below (wearing red) are of me winning 400m at the MAC Championships. Got 2 championships under my belt right before I got injured.
Trying to get back on the track and compete again caused more injuries due to the weight gain. The whole ordeal was an eye opener, and made me treat my body differently as well as wanting to learn even more about the body through my college years. I earned my Bachelors in Exercise Science and Sports Medicine and from there my career in the health and fitness industry blossomed.
Not only do I share my personal story, but I share the stories of those I have had the pleasure to work with through my career and family who I have seen battle with health issues. No matter what our current condition whether we are a beginner or advanced, we ALL have a story. The major key to it all is the importance of how we treasure our health…because without it we can’t get very far. Our health is indeed our wealth.
.

Make It Right, Get It Tight LOSIN’ IT Fitness Program Challenge

❇️CLICK LINKS BELOW FOR INFORMATION ON THE Make It Right, Get It Tight LOSIN’ IT Fitness Program Challenge…and Register!

ABOUT Make It Right, Get It Tight CORE Based Programs

❇️The top 2 photos were taken August of 2017. Many may think I was pregnant, but that was far from the truth. I had my daughter in 2014 and my son in Aug. of 2016. 2017, was a time that not only was I going through frustration, anxiety, and feeling depressed, I was dealing with diastasis from my pregnancies. So those top photos were basically a representation of feeling defeated at that time.

❇️Due to all of those negative emotions against me, I became overweight, lethargic and just not myself. It wasn’t until I took those top photos, that it was the pivotal eye opener for me to get myself back together! That’s just what I did, and went into MAKE IT RIGHT, GET IT TIGHT mode.

❇️The bottom two photos were taken June 2018, 24 lbs lighter and physically  and mentally better. I am still in progress and excited about my healthy transformation.

❇️If I can do it, YOU certainly can too!

❇️CLICK LINKS BELOW FOR INFORMATION ON THE Make It Right, Get It Tight CORE Based Program Options…and Register!

CORE BASED- THE CORE FLOOR PROGRAM

CORE BASED- CARDIO AND CORE- CIRCUIT AND TABATA STYLE PROGRAM

CORE BASED- CORE AND CARDIO-CIRCUIT AND TABATA STYLE VIDEOS

❇️CLICK LINKS BELOW FOR INFORMATION ON THE Make It Right, Get It Tight BODY FLOW Fitness Program Challenge…and Register!

❇️CLICK LINKS BELOW TO HEAR EACH OF THEIR 4STAR FITNESS EXPERIENCES!

✳️Welcome to the JUST MOVE section of the 4Star Fitness Website!

✳️When you see a TRY ME! Link, you are free to follow along OR simply use as an idea to incorporate into your own routine!

4StarFitness · Copyright © 2020 All Rights Reserved
iThemes Builder by iThemes · Powered by WordPress & hosted by SiteGround WordPress Hosting
We use cookies to ensure that we give you the best experience on our website. If you continue to use this site we will assume that you are happy with it.Ok