An Inspiration…Martha Cox. A Y Story to be told 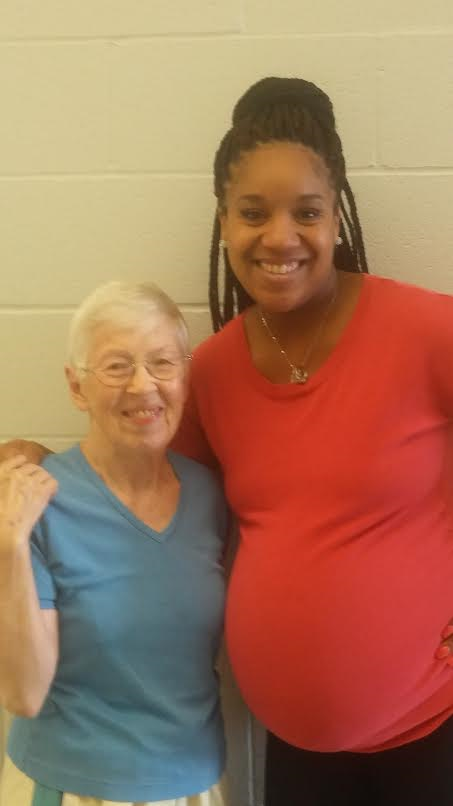 As the Health & Wellness Director at the Eric Snow YMCA, there is no excuse for me to look the other way when it comes to my fitness when I have it all right there within my job! As some members know and have witnessed, I have been keeping myself busy during my pregnancy in the pool. I believe it’s one of the safest and greatest feelings ever during pregnancy and that’s what I chose to do to keep myself in shape and conditioned for the big day! I did the same exact thing, right here at the Eric Snow YMCA, when I was pregnant with my daughter in 2014.

While going through that journey, I met a few people who helped encourage me while I did my water routines. One in particular was Martha Cox. We always seemed to have the same schedule, both in the pool doing our workouts. We would have little conversation during our pool workouts, and after, she would reassure me that what I was doing was great.

About a few months ago, Martha happen to be at the Y when I brought my daughter in to introduce her to the very pool I did my workouts in when I was pregnant with her! Martha got a chance to see her swim, and I thought it was so ironic yet the best timing.

Fast forward to Thursday, August 04, 2016, almost 2 years later, Martha has yet again watched me condition myself in the pool with my 2nd pregnancy. While we both did our workout routines that day, something just touched my heart and felt compelled to ask Martha if she would be willing to share her Y story of why she attends the Y. My reasoning?  She is so consistent, and to be honest, her age is what struck me to ask in the first place. When Martha stepped out of the pool we began the conversation and I was blown away.

Martha is 88 years young. She tries to come and swim at the Y daily, doing 30 minutes, non-stop of swim laps. When asked what keeps her motivated to do what she does she replied “I use my swimming as devotion, each length I swim I think of a scripture”. Now, earlier, I had commented to one of the lifeguards, how well Martha swam and she must have been some star swimmer when she was younger. HA! As Martha and I got deeper into conversation she shared with me that around the age of 50, after her first grandchild was born, she suffered a venal stroke, causing her to have a major back surgery. She was told she would never walk again. Martha chose to turn to the pool to get herself back on track and it was told to do swimming on her back as suggested therapy. Believe it or not, she didn’t even like the pool, as matter of fact, she couldn’t even swim!!! But something geared her that direction. With the help of her husband’s assistance, Martha began slowly walking up and down the pool and it eventually evolved into Martha becoming an avid swimmer.

Martha has been such an inspiration to me and I am glad I stepped forward to ask her story. No matter what your circumstance; big, small, pregnant, young, old, the list goes on…you can make a difference, you can make things happen. It’s what YOU choose to do. I did not look at either of my pregnancies as a condition, I looked at it as a blessing and a way to keep me to stay healthy and fit, and Martha never kept her age from stopping her doing what she needed to do. That’s why this Y story needed to be shared.

Kudos to you Martha! Keep it going!